The results from the CC6 at Janesmoor Pond were as follows.

Romsey Road Runner Di Cross headed to 1000 Lakeside last Sunday for the first race in City of Portsmouth Athletic Club’s popular Lakeside 5k Series. Conditions for the Prologue – an additional three-lap race held for the first time this season in aid of Hilsea Lido, the race’s HQ – were good: chilly but dry with little wind. Di finished in 23:05, just short of a PB, in 69th place overall, 13th woman home and first in category.

The overall winner was James Baker of Chichester Runners, who finished in an inspirational 15:33. Subsequent races in the six-race series will be held on Wednesday evenings, starting in April.

The route took runners from Whiteshute Ridge out to a loop of Oliver’s Battery and back. Conditions were dry and going was good to firm under foot with the lack of recent rain.

Congratulations to the Romsey women who won the event!

This weeks racing highlight for Romsey Road Runners was the organising and supporting of the second cross country race of the CC6 series at Kings Enclosure, Stoney Cross with fellow Halterworth Harriers.

A total of 77 ladies and 117 men turned up on a bright sunny Sunday morning to complete two laps of a gravel and forest track course looping through the enclosure. Rain during the week and heavy down pours on the preceding day had made conditions muddy underfoot, adding to the fun and excitement of completing the undulating 6.5 km course. All runners were cheered on by the many marshals from both clubs who stood at strategic positions along the route to avoid anyone getting lost.

The race was won by Tottons, Nick Buis and first lady home was Valeria Sesto from New Forest Runners. Romsey fielded a ladies and mens team and stand in 7th position after the second race.

The Bramley 10/20 mile road race took place on Sunday 17 February, organised by Reading Road Runners. The route is entirely on road, mostly flat, with a couple of undulating sections, using Bramley Primary School as the start and finish point.

This is a key event for all those preparing for a spring marathon and is used to indicate how training is progressing. The conditions were perfect for the longer distances; cool and sunny. There is a choice of a single 10 mile lap, or two laps making 20 miles.

The penultimate race in the CC6 series took place at Denny Wood on Sunday 10th February; this latest race provided lots of mud and puddles – a typical cross country. The event was marshalled by Totton Running Club who stood in the rain to cheer on all club runners, their efforts greatly appreciated. A total of 11 Romsey runners finished, and although some of the overal results have now been decided, the final race in March will decide the laides title which Romsey’s Shantha Dickinson is in the running for.

Prior to this, the 23 January marked the Stonehenge Stomp, a choice of distances or walkers and runners to tackle around the famous stones. It was organised by the Amesbury Walkers of the Long Distance Walkers Association. All distances started from Amesbury Sports Centre and followed gently undulating routes around Amesbury and Stonehenge. Tam Ryan tackled the full 40k, Lynda Brown and Di Cross the 30k, and David and Ruth Page the 20k. The going was very wet and muddy underfoot, with the chalk making for slippery, energy sapping conditions. END_OF_DOCUMENT_TOKEN_TO_BE_REPLACED 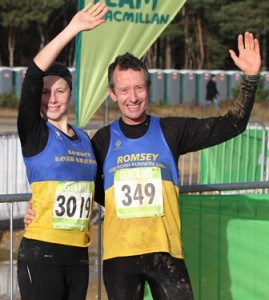 On Saturday 1st December, Candy Snelling, Paul Bradley and around 3,000 other runners braved the waist deep, ice covered, puddles and mud of the ‘Grim’. This is an 8 .5 mile cross country race at Aldershot, on a military vehicle testing facility in aid of Macmillan Cancer Support.

There was added spice to the race as Candy and Paul work in the same building and had a bet that the looser would buy cakes for the others’ office. On the day it was youth that triumphed over experience as despite both getting personal bests for the course of 1:08:26 (243rd) for Candy and 1:11:21 (358th) for Paul. END_OF_DOCUMENT_TOKEN_TO_BE_REPLACED